Last night was family pizza and movie night, or as we call it, "Ta! and Top!" "Ta!" is how Evan used to pronounce his favorite food in all the world. Now he says something between "pizza" and "tizza." "Top!" is what Ev calls Top Gear, a really cool BBC-produced car show, which is usually our movie selection. We hardly ever end up watching an actual movie unless it's a family favorite like Cars or WALL-E, because a lot of kids movies end up being too scary for Tobin. Plus, it's tough to fit a movie in with the boys' 7:30ish bed times. Top Gear usually fits the bill perfectly because it's only an hour long, streaming on Netflix and entertaining for both kids and adults. It's definitely an adult show, with the occasional off-color joke that hopefully goes over the boys' heads, and we do fast-forward through the talking parts sometimes, so we can get to the portions with fast cars! Other family favorites are episodes of Phineas & Ferb and Spider-Man: The '67 Collection.
For supper, I usually make a couple 14-inch round pizzas. 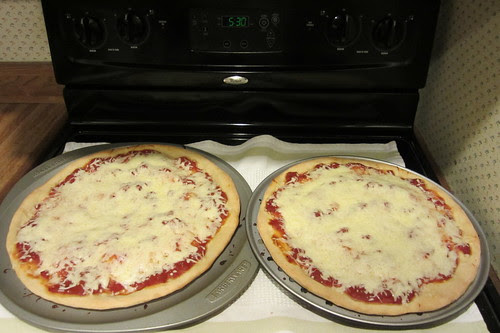 I make the crust using the dough cycle on my bread machine and this recipe. (I substitute up to one half the flour with white whole wheat.) The dough is fairly easy to handle and delicious. My sauce recipe comes from one of my favorite cookbooks, The Perfect Recipe by Pam Anderson. It's just one 28-ounce can of crushed tomatoes mixed with 2 to 3 tablespoons of olive oil, 2 minced cloves of garlic and salt and pepper to taste. (No cooking required!) I use half the sauce between the two pizzas and freeze the other half for the next time I make pizza. I bake the pizzas at 450 degrees for about 12 minutes (rotating the pans top to bottom halfway through) with just the sauce and any other non-cheese toppings. I add about 1.5 cups of shredded mozzarella or some other Italian-blend cheese per pie and bake for an additional 5 minutes (again, rotating at the halfway point).
We usually have pizza and movie night once a week. For me, it's an easy, frugal meal option when it comes to menu planning. Plus, making it regularly has helped me hone my dough-handling skills. For the boys, it's always a hit! It really is so tasty.
On special occasions we will order from our favorite local pizza place, Randy's. Last night was extra exciting in that the boys actually made the pizza using a Little Caesars pizza kit we bought as part of a fundraiser for Tobin's school. As you'll see Evan was particularly focused on his work. And I wish I could have recorded him saying "pepperoni." It turned out "extra delicious," per Tobin.
Posted by allison at 2:37 PM