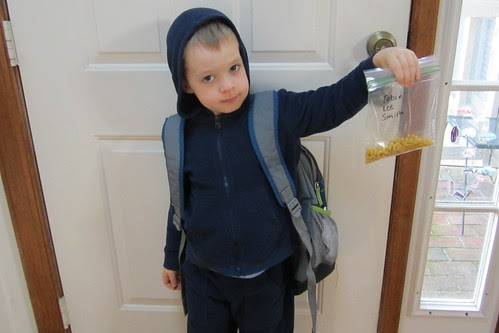 Today was Tobin's 100th day of Kindergarten. It was also a lunch bunch day. Tobin was pretty excited. His teacher gave two "homework" assignments to help celebrate today. (Tobin loves homework!) The first was to collect 100 pieces of a small item and bring them to school in a baggie. Tobin decided on macaroni. One afternoon earlier this week, I set him up with four measuring cups, thinking he could use those to count by groups of twenty-five. And then I went to put Lauren down for her nap. 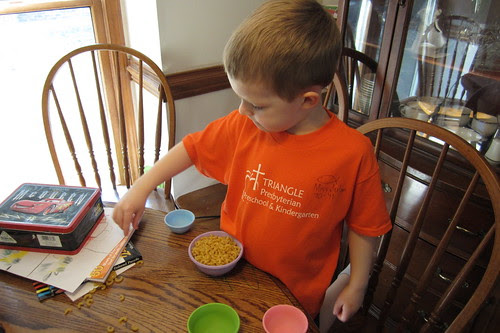 Returning about ten minutes later, I found him counting the last few pieces of pasta to put in the bag. He said, "Mom, can you believe this is 100 macaronis? It looks like less than I expected. I'm going to count them again." And then he poured them out and re-counted. All told, he counted them about ten times--and by ones, instead of tens or some other denomination, because he thought that was easier. Since he seemed to enjoy the counting so much, I suggested he could use the leftover pasta and the smaller measuring cups (1/4-, 1/3- and 1/2-cup sizes) to test whether they filled up the one-cup measuring cup like the were supposed to. He loved it and worked on that for another 30 minutes or so. Spontaneous fractions lesson!
The second thing Tobin's class did for the 100th day of school was set a goal to collect 100 cans of food for a local food drive. Tobin told me that a part of the assignment Ms. Alana forgot to tell the parents about was that the student should help his parents go buy the cans. I think he may have been creatively interpreting the assignment, but that's what we did. We don't have many canned foods in our cupboards anyway. I used it as an opportunity to check out the new Aldi grocery store that opened near us. When we got home, Tobin made a list of the foods we collected. He did his own abbreviations and it reads as follows: black beans, red beans, peaches, pinto beans, mandarin oranges, corn, black-eyed peas, pears, sweet peas and green beans. 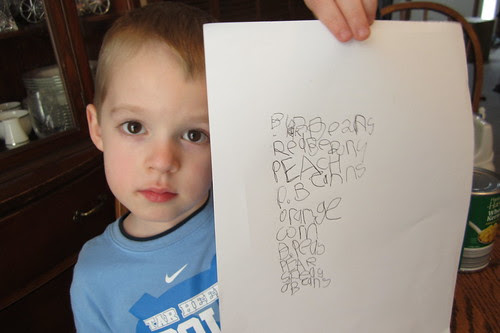 When we were picking out cans, Tobin was sure to pick "only foods I like." Before we packed them up to take to school, he grouped the cans by vegetables, beans (presumably legumes) and fruit. 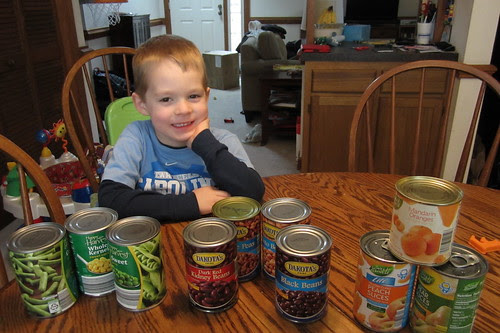 Tobin's class of thirteen students ended up surpassing their goal and collecting 102 cans! And they used the 100-item baggies to compare their relative weights. One hundred pennies ended up being the heaviest, Tobin reported. They also did other fun 100-themed activities, like jumping up and down 100 times and making necklaces with 100 beads. Well, Tobin didn't finish his necklace so he "had" to bring it home as homework--and happily he did.
Posted by allison at 3:36 PM