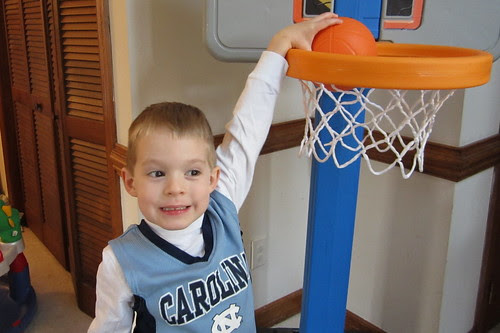 We're usually a basketball house divided--Tobin cheers for UNC and the rest of us, Kentucky--but not today! The Smiths are pulling for the Tar Heels in their first of two regular-season matchups against the Blue Devils. Tobin developed his allegiance to UNC around Evan's age. Given the predominance of UNC and Duke basketball around here, it's totally understandable. Plus, Tobin technically attended UNC School of Law, since I was pregnant with him my 3L year, obtaining my diploma just four days before his birth. And I guess we're lucky he chose UNC over Duke. I don't think we would have indulged his independence had he chosen the latter; there might have been a parental intervention.

Relatedly, Matt has made concerted efforts to cultivate Evan's preference for Kentucky. Whenever Ev sees the UK logo or mascot, he yells "Go Cats!" He has learned to counter Tobin's "Go Heels!" chant with "Go Cats!" Matt and I won't insist that Evan pull for the Heels today, but his big brother might take issue with the implication that, by not pulling for UNC, Evan is pulling for Duke. Thankfully, the game is on at 9pm, well past the boys' bedtime, so any arguments over who should be cheering for whom will happen during tomorrow's Sportscenter highlights.