Sometimes we call her Lala. 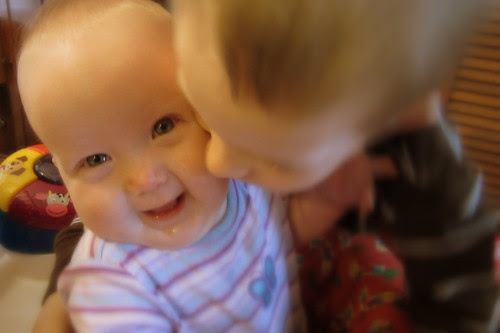 sometimes we call her lala., a photo by allisonandmatt on Flickr.

When we were picking out names, I became especially enamored of calling our baby girl Lala. (That's "la-la" as in a happy little song of a baby girl--not "lay-la.") I mostly think of her as Lauren and imagine she'll go by her given name, but one of the factors that pushed Lauren Lantrip to the top of my list was this lyrical little nickname. Matt started calling her Els (think "L"s plural, for her initials: LLS) when she was still in utero but we'd secretly settled on her name; we all love that one too. But lately, I've noticed how frequently and naturally Tobin calls her Lala. Hearing him walk in the room and greet her with a happy "Hey Lala!" warms my heart. Evan mostly calls her Lauren, or as he pronounces it with an extra "N": "Waurnen." (He pronounces his own name "Ebban.") As Lauren's mama, I also call her all manner of baby-inspired pet names, chief among them: Angel Muffin. That is perhaps derived from Muffin Muffin, which I called Evan as a baby? I honestly don't know where these names come from, except my mama heart.

On the subject of kiddo nicknames, Evan is Ev. Matt and I do call him Stinker, mostly behind his back but we occasionally slip up and address him as such to his face. Hopefully, we'll all grow out of that. Matt also calls him Bird, which I think is based on the sounds he used to make as a baby.

And Tobin is just T. He had a teacher at his daycare who called him Toby when he was an infant. Sometimes, people will misunderstand his name and assume it's Toby. But we've never used it--just doesn't seem to fit. I've always spelled T just "T" in my head and consequently when I'm writing. As Tobin is doing more and more writing of his own these days, he spells it "Tee." In fact, he recently signed a birthday card, "Love, Tee, Ev and Lala." Adorable.