Most things can be funny. I'm fortunate to have grown up in a house that laughed a lot, and I'm thankful to live in one that does, too. Laughter has been on my mind a lot the last few days. I'm teaching a class that has begun a humor and satire unit at school, and a friend and I have been trading emails about the brilliance of Calvin & Hobbes comics.

Our kids are funny (these are some of my all-time favorites). 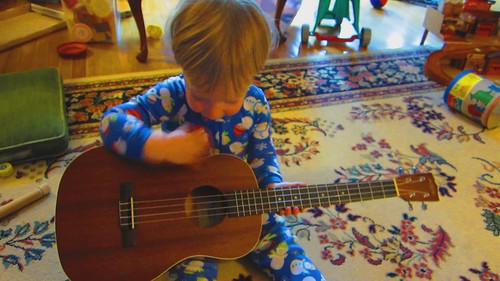 I also appreciate that we laugh at silly things, like funny sounds or ridiculous movies, or laughing when we're scared or surprised. I don't feel like it's a stretch that we laugh in our house every day. I'm thankful to live and laugh with my family at this precious time.
Posted by matt at 9:42 PM No comments: 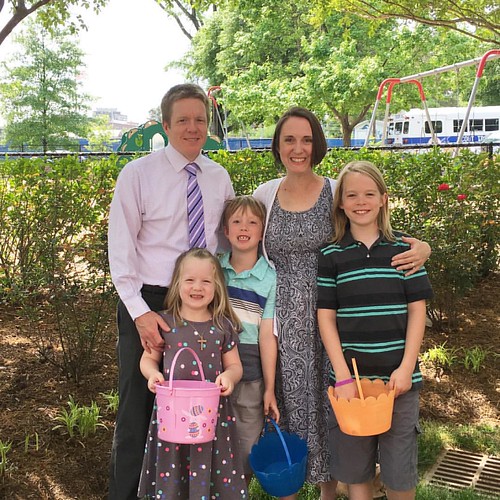 We were home for Easter this year. After spending spring break in Florida with my parents, we headed home for the weekend, since school resumed the Monday after. We also got back in time for the kids to each play a baseball game.

The holiday, a truly Holy Day, of course, has inherent significance--well beyond the traditions of our little family. That said, I've come to love how we celebrate it. What we've cultivated over the years is a day full of joy. This does include things like toys and candy, but it always includes time together. This year our time together was blueberry muffins for breakfast, church, an egg hunt in our front yard, and then an afternoon and evening spent relaxing and playing together.

I'm grateful for Easter, for our family traditions, and the memories we make. I'm also thankful that I have pictures of us each year. My heart aches and swells looking through these as they show the many and varied seasons of our family life.
Posted by allison at 11:32 PM No comments:

Things are shifting. The air is warm and sticky, thick with pollen. Today, the sky was wild and the wind, fierce. We experienced a mostly mild winter--a spring preview of sorts--but now the warm weather is here to stay, even if it is a bit dramatic this week.

We watched our last college basketball game of the season on Monday night. Tobin's favorite team was playing for the title. Last year, we let him stay up when they played in the championship also. That game ended in heartbreak. This year ended in happiness. I know it's just sports, but it felt bigger than that. I spent most of the game worried about how he would handle another loss, fretting that I would have to explain to him again that some things don't go the way we want them to. But then the Tar Heels made just enough good plays to win the game, and we hugged and were grateful to share such a joyful (exhausting) moment together.

Our sports focus shifts outside, in the longer daylight hours, to baseball. All three kids are playing this season. They put on their gear, pack their bags, and pile in the van to go spend a couple hours at the ballpark. They're talking about hitting and catching, and can't wait to get their new uniforms. We will sit beside both familiar and new faces on the bleachers, cheering our kids on. There's a lot of promise as the season begins.

I'm emerging from my running slump, making efforts to stick to a more consistent routine. It's easier to do when the mornings are so pretty. In a couple months, I'll try to get up and out there before the sun is up, but right now I'm enjoying the combo of sunshine and still-cool morning temps. I often find myself in a familiar place each spring: frustrated with myself for slacking off on running in the winter but eventually encouraged as I build my stamina back up. I've been here before; I know I can do it.

Next up is a little break from school and work. We'll spend a week in Florida with my parents, playing and resting. We'll come home to backyard Wiffle ball, gardening, and weekly cookouts. I'm thankful for the change in season and how it feels both familiar and new.
Posted by allison at 10:29 PM No comments: