In the last week, we've taken all three kids to the pediatrician's office for well-child visits. This will likely be the case for years to come, since their birthdays fall within 6 weeks of each other.

Tobin, at 5 years plus 2 months, weighs 43 lbs. and is 43" tall, hovering around 50th percentile for both. Tobin thinks it's neat that both measurements are the same number. So does Mama, because it's easy for her sleep-deprived brain to remember. Twenty-five-month-old Evan weighs 28.5 lbs. (50th percentile) and is a fairly tall 35" (75th percentile). I'll remind you that he weighed almost 26 lbs. at 9 months old, so he's spent the last year-plus growing into a much leaner kid. Each boy had to get one vaccination and incredibly neither cried when given their shots. Both are wonderfully healthy in all respects.

Little Lauren weighed 10 lbs. 14 oz. (90th percentile) and measured 21" long (50th percentile) at one month old. Like her brothers did at her age, she's growing like a champ on her mama's milk. As she just passed the 6-week mark, we're seeing smiles and hearing some almost-cooing. Lauren has definitely had daily fussy stretches, usually in the morning and evening but really they could happen anytime a day. At these times, she's been unsettled--not completely inconsolable but also not easily consoled. She'll fuss and won't nurse, so we just try hard to soothe her to sleep. The last few days we've seen less of this fussiness and more happy awake time followed by easier transitions into longer naps. Her fussiness, which I'm hesitant to label as colic, is similar to her brother's except that theirs was more predictably during the evening hours, whereas hers has been at different times on different days. Mercifully, it's only happened for short periods over two or three night times. We're hopeful that the last few days are a sign that she's settling more and more into life outside the womb. I just marvel at the simple yet tremendous blessing it is to have another healthy and relatively easy infant.
Posted by allison at 3:47 PM 1 comment:

At this writing, Lauren is actually 3 weeks and 3 days but way back on July 1 (our 11th wedding anniversary!), we took her in for a well baby appointment. At 2 weeks and 1 day, she weighed 9 lbs. 2 oz. (75th percentile) and measured 21.5 inches long (90th percentile). She's smaller than her brothers were at 2 weeks; both were over 10 lbs. at that point! But "small" is relative only to her siblings as she's obviously a large infant. I will say I'm a skeptical of her length measurement as it has her growing 1.5 inches in two weeks. Maybe she's just able to stretch out more easily now and it was actually the earlier measurement that was off. Although I knew she was nursing well, it's always nice to have the reassurance of a healthy weight gain. She is perfectly healthy in all respects. And we are so thankful. Here's a picture of her at 2 weeks old, snuggling with her big-big brother. 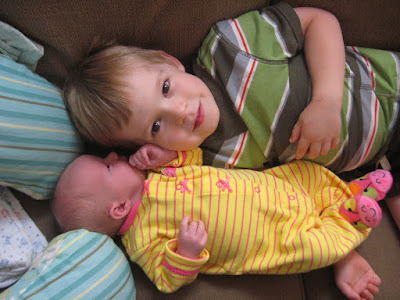 Posted by allison at 4:20 PM No comments: