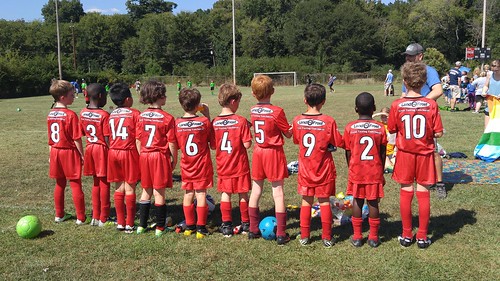 We're parents of three soccer players on four soccer teams. This season has been full of successes so far, with an overall-winning record and lots of fun. I'm especially thankful to experience soccer as a parent, since it wasn't ever really on my radar as a kid. Tobin teaches me about strategy and lineups, explaining parts of the game I don't understand. Evan (#8 in the pic) asks me to play goalie for his shots and practices his moves. Lauren plays with a recklessness and glee that are a wonder (and fit her personality perfectly).

I'm thankful for soccer, and thankful to have learned about it as an adult.
Posted by matt at 8:59 PM No comments:

With two schools, three kids playing on four soccer teams, and two working parents, life feels busier than ever. Tobin made his middle school soccer team, which means he stays after school most days until 5:30 for practice or games. All three kids play league soccer, which involves Tuesday and Thursday evening practices and one Saturday game. I work two part-time jobs, only one of which involves me going to an office. But I’m also still going to a PTA-related meeting almost weekly, which will make a given weeknight all the more hectic. September has been full of evening meetings for Matt, too.

Yesterday evening ended up being one of the less hectic ones this week, but the lead-up to it was plenty busy. I took the kids to school then went home to prepare for an 11:00 meeting in Raleigh, 45 minutes away. I had taken the day off from my office job, so I could attend this meeting at the law firm I work for (albeit, usually, remotely). My meeting was short and put me back in Durham by 1:00, but I had to run by Costco. I got home with about an hour to spare to eat some lunch and check emails, then the kids started arriving home around 3:00. All the kids. Tobin had a rare day off from soccer. While they did homework and played, I made a pot of chili for dinner. Matt got home from work at 5:15, when I headed out for a school meeting, leaving him to feed the kids.

I pulled in the driveway around 7:00 and saw a smiling Tobin running around the backyard. He was playing touch football with Matt and Evan. When I walked in the house, I could hear Lauren’s voice from the playroom, engaged in some sort of chitty-chatty, imaginary play. The evening had a more relaxed feel, because the kids had been home—not rushing in from somewhere, scrambling to take showers and get in bed.

We’d done it. We’d made it through another very full day. And everyone was pretty happy. I don’t love being this busy. In fact, Matt and I try to plan the kids’ schedules so they’re not too busy—e.g., only one sport per season . . . with the exception of school sports, which is a new thing for us? But the current fullness of our lives highlights so many things I am grateful for: healthy, able bodies; sports; community; a true partner in parenting; two vehicles; a big yard for football; jobs; good schools; and even enough hours (in some days) to make good food for my family.
Posted by allison at 9:08 PM No comments:

I've enjoyed watching T grow into increased independence as he has begun middle school over the last few weeks. Still, I admit it's pretty easy to fall into the trap of worrying about "influences" he'll encounter. The Internet adds a level of uncertainty and potential danger that I hadn't really thought about before. Part of me understands the decisions parents make to reduce their children's exposure to the world and the specter of "bad influences."

For a long time, the "talk" that I worried about having with T was "THE TALK." We've had a few discussions about adolescence and sexuality, but the talk that I found myself surprised by was one we had a few weeks ago as ugly scenes unfolded in Charlottesville. We were watching sports (surprise) and passing mention was made of white supremacy and white nationalism. T asked about them, and I found myself trying to explain a fearful mindset I myself don't really understand. As I tried to think about how to frame our discussion, I found myself wondering about people T might encounter who would influence him to think wrongheadedly about race and his own whiteness. I found myself thankful that we live in a community and attend schools where integration, diversity, and immigration are practical realities, not theoretical abstractions. When I can cite friends of ours as examples of people those in Charlottesville would label "undesirable," the absurdity of so many represented there presents itself.

I tried to think of how my own parents guided me through their worries about "influences." I think the first time I was aware of the word "boycott" was when my dad announced that we wouldn't buy products advertised on a certain radio show. I remember a fleeting disappointment that we weren't going to get Snapple any more, but as I think about it from a parental perspective, I understand wanting to reduce exposure to vitriolic, extreme views about the world. I don't know if boycott is the way to combat such things, but I'm thankful in retrospect to have had parents who talked to me frankly the best they could about race, class, and politics.

I've resolved to try to do the same as a parent. As a public school teacher, I feel like I hear a lot from parents, other teachers, and the community regarding concern about "bad influences." Coded language about "good school/bad school" binaries often dances around the racial and socioeconomic makeup of those schools. Having gone to a high school myself that many expressed polite (but implicitly racist) concern about, I feel like I understand that code better than some. My line as a teacher on influences has always been basically this: I agree that influence should be a great concern. I'm mindful that influence is both good and bad. I've seen students seemingly "led astray," sure, but I've also seen students make constructive, positive changes and decisions based on the positive influence of their peers. I'm concerned that parents who make decisions ruled by fear of otherness, difference, or the potential for bad influence are possibly removing their own children from an opportunity to be good influences themselves, or at least to more realistically see the community they live in.

I'm thankful for the good influences in my life, and for what I hope has been an opportunity to be a positive influence in schools and my community. As a parent, I hope I can keep my instinct to overprotect and shelter within a rational framework so our kids can learn and succeed and fail and grow to be influential members of their own communities.
Posted by matt at 11:11 PM No comments: