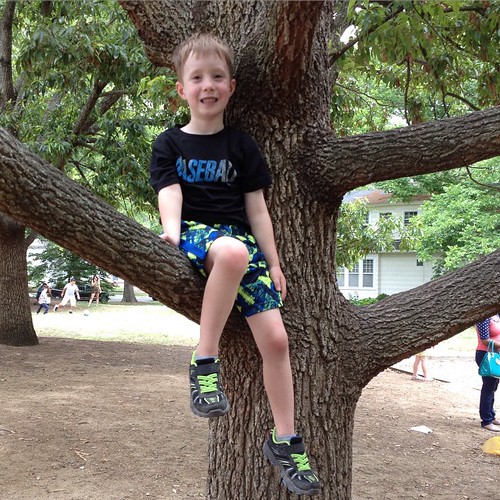 I'm playing catch-up after a week with not-the-best broadband speed at the lake in Louisiana. Rounding out our six-week Smith kid birthday extravaganza, Evan turned six on Sunday, June 28. That morning, we were staying at my aunts' house in Lake Charles, sleeping all together in one room. The kids were up a little before 7am, chatting still snuggled on their pallet on the floor. Tobin was reminding the younger two they had to wait 11 minutes until 7:00 before they could get up. Then they were pretending they were each Carolina Panthers. Lauren was whining that SHE wanted to be Cam Newton because "he is so funny and I see him on TV all the time!" Evan wasn't saying much. Matt and I were in our bed, amused as we eavesdropped. Then I suddenly realized what day it was and told Matt to go scoop Evan up and bring him to our bed so we could sing happy birthday to him. So there we were, our middle child snuggled between us, ready to give him a special moment on the morning of his sixth birthday. We barely got "Happy birthday to you" out when Ev started crying and tearfully said, "But I wanted to just stay in my bed." I asked, "You don't want us to sing to you?" "No," he sniffed. Matt took him back to his bed and we let him do his own thing. 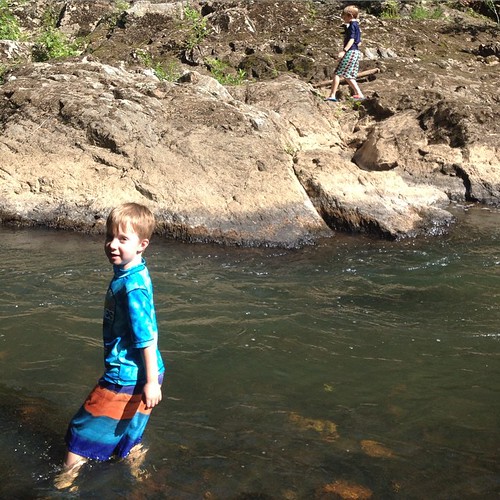 What I should have remembered is that Evan rarely likes to be the center of attention. I never quite know how he is going to react to a certain situation. He is the most bashful of my three. Yet, he's arguably the quickest to make friends. He has a way about him that attracts other kids to him. From a very early age, when I would take the kids to a park playground, within minutes he would have made friends with a complete stranger and they would be running around as though they were best friends. 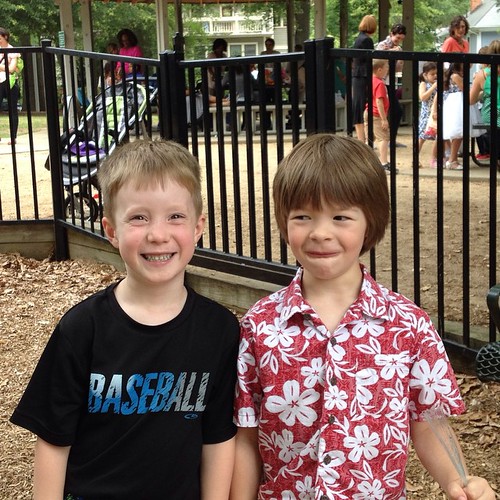 I used to say that "E" is for enthusiasm. He's always been an excited little guy. Some of that enthusiasm has mellowed with age, especially if he notices someone is paying attention to his reaction. These days, I'm more likely to say that "E" is for empath. Evan's teacher remarked about how excited he gets for classmates when they accomplish something or share something happy. Evan is also considerate of his siblings--most of the time. At the end of the year, his school library was giving away free books to each student and he picked one called Animal Babies because he knew Lauren loved baby animals. After his T-ball team beat a classmate's team, he checked in the next day with his friend because he thought his friend was kinda sad and explained, "Well, my team won because my coach really wanted us to"--which wasn't entirely accurate, but was a sweet sentiment. 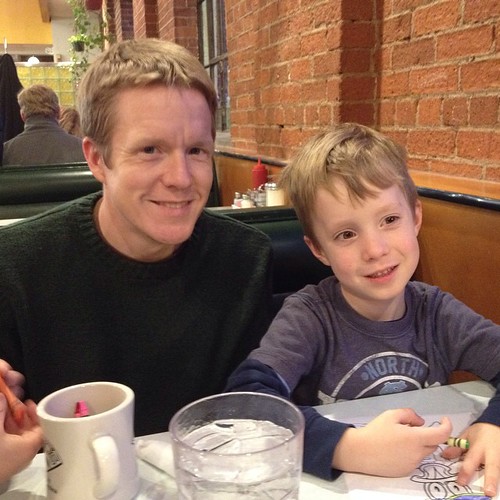 Kindergarten was a year of growth for Evan. It was a joy to watch him grow in confidence, both in taking on the role of being one of the older kids in his combined pre-K/K classroom, and in his reading and writing. He worked hard on mastering his sight words and took special care with the drawings he narrated in Writer's Workshop. He wrote how-to manuals on football, baseball and LEGOs. He seems to really love math. 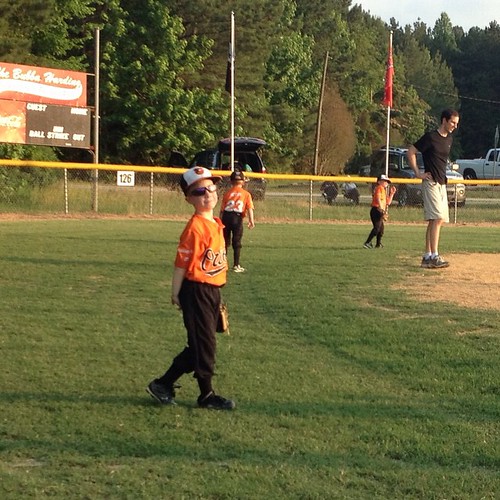 Baseball ended up being an especially fun part of Evan's sixth year. Last year, we thought Evan might start T-ball since that was the age Tobin began. But he was pretty adamant he didn't want to play. So we decided to wait until this spring. He still expressed some hesitation but we encouraged him because we felt sure he would enjoy it. He's played two seasons of fall soccer and has had so much fun. He's a pretty good backyard wiffle yard player too, so we felt like he was ready. 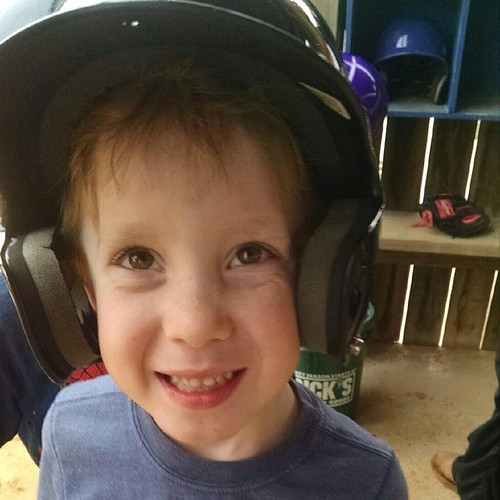 From the very first practice, Evan was all in. He proudly wore his Orioles hat and jersey even between games, donning the number 89 for his favorite football player, wide receiver Steve Smith. Evan's Orioles team was a particularly special one. The kids were great and the coaches really fostered a fun, upbeat atmosphere. They didn't win their first game until late into the regular season, but that made the victory especially sweet, and it was really awesome to see how they improved to reach that point. The Orioles headed into the postseason as the 8-seed, so they had to take on the undefeated 1-seed Rays in the first single-elimination playoff game. In his league, they play four innings, with a 5-run scoring limit for each inning. In an exciting contest, the Orioles led the Rays by 4 runs heading into bottom of the fourth and final inning. Evan was stationed at third base; he hadn't played that position much before. As I recall, the Rays got their first two runners on; they may have even scored a run. With runners on first and second, the coaches reminded Evan that if the ball wasn't hit directly to him, he should drop back and cover third so that Chase, the pitcher, could throw to him to get the force-out at third. The next batter hit the ball to Chase, who threw it perfectly to Ev. One out! Then, the next batter hit it to Chase, who threw it to Ev for the second out. I couldn't believe my eyes when the third batter in a row hit it to Chase. Evan bobbled the catch and dropped the ball onto ground, but calmly picked it up with his foot still on the bag just in time to get the third and final out. It was such a fun moment, with players, coaches and players cheering an arguably improbable sequence of events. (T-ball games aren't really conducive to getting three outs in a row. Ha!) After the game, my smiley Evan kept shaking his head and saying, "Mom, I didn't know I could catch the ball at third base like that." I hugged him and reminded him that he practiced hard and listened to his coaches well, and I told him I was just so proud of him. The Orioles went on to win another playoff game and finished the season in second place. Evan was disappointed to lose the championship game but was quickly distracted by post-game popsicles and, later, thrilled to get a cool second-place trophy. 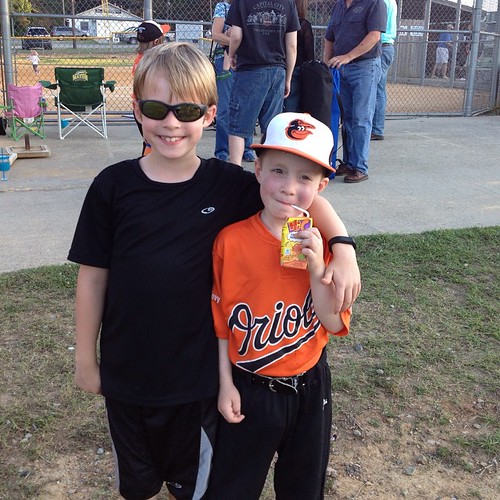 Everybody's growing quickly around here, but I'm particularly blown away by the strides Evan has made, taking bold steps out into the big, beautiful world. Still, his heart remains quite tender and close to home. After a fun evening hosting some friends at our house, Evan said he loved our house and wondered if we would live in it forever. I said, "Well, Dad and I might live here forever, but you, Tobin and Lauren will grow up and move to your own houses." His eyes widened and welled up a bit, and he insisted, "No, I'm going to live with you here forever." I pulled him into my arms and promised he could live with us as long as he wanted to. Ev recovered and then quipped, "But if I do move out, I'm taking the PS4 with me!" 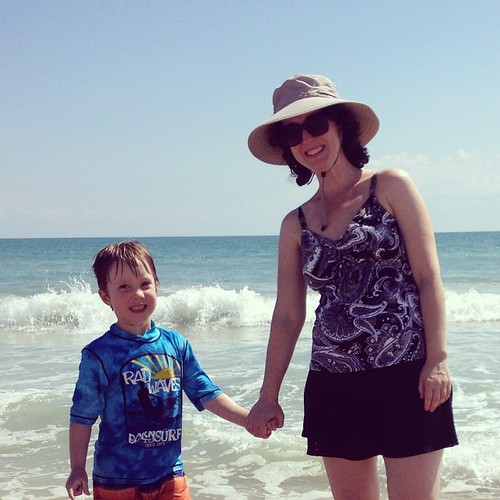 Posted by allison at 4:07 PM No comments: