This is the 200th post on the Toblog, so it's only appropriate that it coincides with such an important day. On Tuesday, T turned 4. His mom and I repeated it out loud to ourselves a few times during the day, almost in disbelief. Has it really been 4 years since we brought a squirmy, fragile baby home? 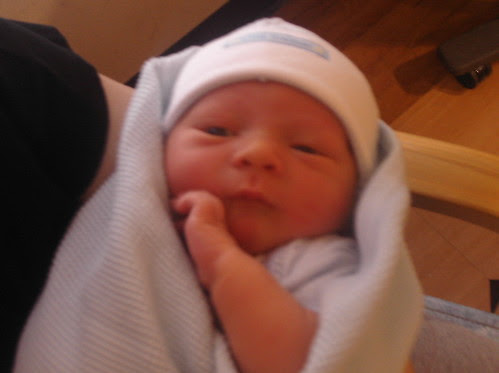 I took the day off work so we could all be together. We enjoyed a morning of phone calls from family, breakfast, and the T's first hesitant ride on his big-boy bike. After Evan's morning nap, we made a trip to Raleigh's Museum of Natural Sciences. Lunch was Chick Fil-A (the second of three meals T chose for us on the day), then we came home to play all afternoon. The video below is an attempt to share the big parts of the rest of our day with you. (The birthday party he mentions will be on Saturday, so there's still more fun to look forward to here.)

After about a month of scooting backwards to move around the house, Evan made the leap into full mobility last Saturday. He was 10 months and 10 days old (just returned from a week in Florida) when he started crawling around the house. By the end of the day, he had explored thoroughly, pulling things down and reorganizing as he scooted along. His disposition has changed along with his new skill. Before, he would often grunt at us when he wanted something. Now, he just swings down into position and cruises along. His brother is excited for him, and has been crawling around with him a lot. During the week, I shot almost as much video of Tobin crawling and blocking Evan from the camera as I did video of Ev crawling. I still remember how much fun I had sharing video of Tobin crawling, so I decided to give Evan the same treatment. I hope you enjoy it as much as I enjoyed putting it together.

I took Tobin to a baseball game tonight. We went to one on Monday night and sat with pretty much the same group of people, so he was familiar with the routine. His comfort level contributed to a high level of conversation with everyone around. Here are a few examples (fresh in my memory, and as close as I can get to exact quotes).