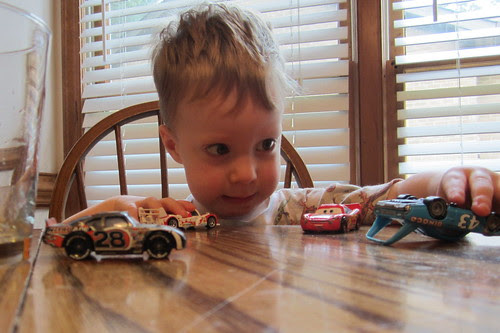 About twenty times a day, I hear "Mama, whatcha doin'?" It seems to be Evan's go-to phrase and more a greeting than a true inquiry because he says it almost automatically upon seeing me, whether I'm cooking in the kitchen, nursing Lauren, returning from grocery shopping, getting dressed, changing Lauren's diaper, fixing him a snack--all things he sees me doing regularly. Evan is good at keeping tabs on me. He always has been. Now he's just more consistently using words to let me know. If I'm in the kitchen preparing food or cleaning dishes, his usual quick follow-up is "I wanna help you!" Many times, I try to dissuade his assistance because his idea of "help" usually, um, isn't. When I do let him pull up a chair to the counter, he's very good at declaring each and every dry ingredient--including salt and baking soda--in something I'm baking "tasty!" and throwing measuring cups and spoons into soapy water. Another phrase he's using a lot lately is "no way!" He's clearly mimicking Tobin with that one but he puts his own spin on it. Tobin most often uses the phrase as an exclamation, as if to say "I can't believe it!" Evan uses it as straight up opposition to things like taking a nap, having his diaper changed or coming to the table for supper. But like most of his defiance, it's really just a strong but short-lived sentiment--more an expression of disappointment than disagreement. A typical exchange goes something like this:

(He likes to use the word "cute" a lot too. We blame his baby sister.) 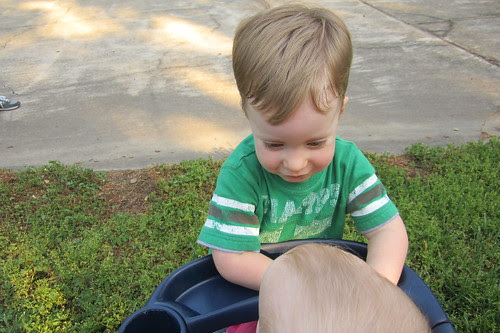 While Evan doesn't exactly make our lives easy, he's always entertaining and, truthfully, quick to come around and acquiesce if we stay firm. Lately, when I tell him it's time to go take his nap, he scowls at me and says "No!" and then runs to the couch, lies down and says, "I'm sweepy!" I shake my head (and smile usually), pick him up to some mild squawking and take him back to his room, where he takes his nap like a champ. 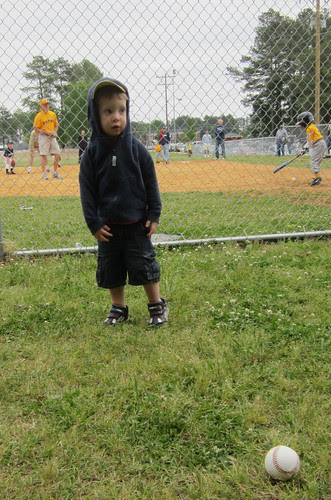 So in addition to doing the hilarious things he's always done, he's now narrating his life and it's only getting better. He's efficient with his vocabulary. Certain words are interchangeable: off/on, open/close and swing/slide. But then there are the less efficient flourishes. Every other night is "bath night time!" When he wakes up after Matt has already left for work, he says "Oh, Daddy go to works!" And then there's just the random quirkiness of declaring the lizards on his pajamas something that sounds an awful lot like "strippers!" 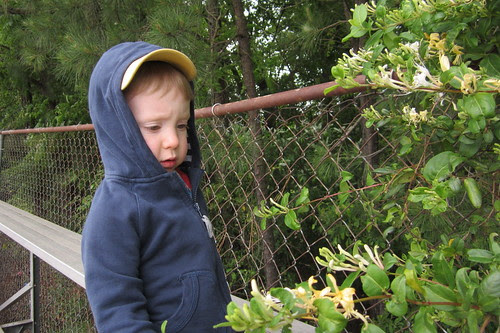 Evan is always up for an adventure. He's quite disappointed that he doesn't get to go "chopping" with me very often as I usually try to do our grocery shopping on the weekends when Matt can stay home with the kids. We've been to the doctor quite a few times over the last two months and Evan has been asking when we're going to go again. It's great that he doesn't dread the doctor's office but it's also not somewhere I really like to go--especially with more than one kid. I had to take Tobin in for a sick visit (strep throat) last week and scheduled the appointment so that I could go in the late afternoon and Matt could stay home with the younger two. Evan woke up from his nap to discover Daddy home but Mama and Tobin at the doctor and apparently was quite distraught. Fortunately, Tobin picked up an extra Superman sticker for him there and that helped smooth things over when we got home. 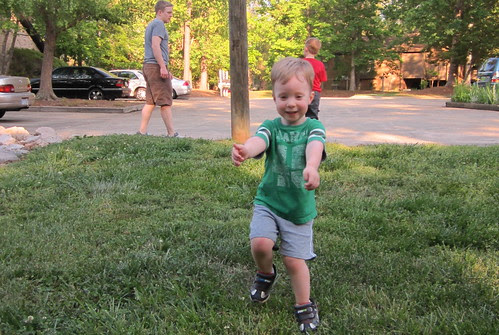 Another recent adventure for Evan was getting his haircut. It had been many months. We loved his longish hair--so fitting for his personality. But it was getting out of hand, so Matt took him in. Evan loved it. He sat and followed directions and enjoyed watching his hair fall to the ground. And when he came home, I greeted him with a squeal because his look was so dramatically different and adorable and he said, "Oh Mama, like my haircut?!?" 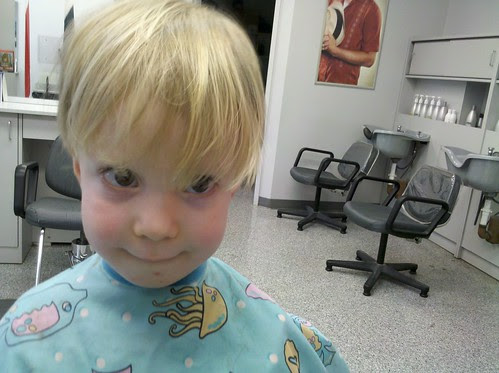 Evan's life remains exciting--as does ours with him. I love this video because it shows how Evan changes his mind (about whether he wants Lauren to knock down his tower) and how strongly he feels about certain things (She was supposed to push over the LION block!). And it's just hilarious, quintessential Evan right now.