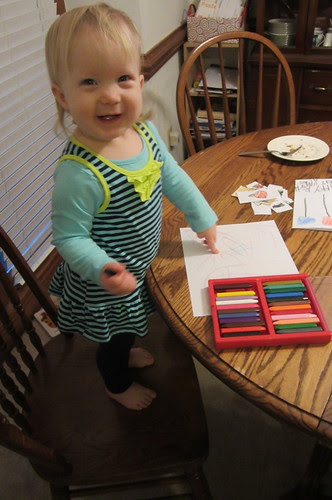 Another month yields another picture of Lauren standing in a chair. But her hair's a little longer and she's probably a bit taller. She loves sneaking up on the table too. 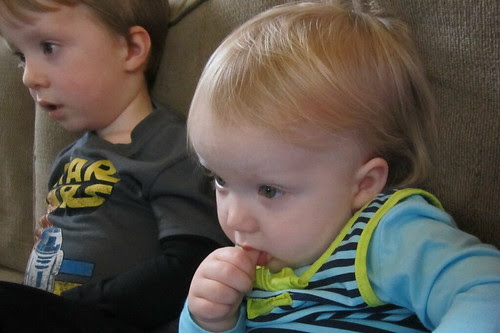 Another quintessential Lauren pose above: snuggled up to someone, sucking her thumb. Lately her naps have been a little on the short side so she wakes up a few minutes before Evan. The moment she hears him yelling from his room, she squirms out of my arms saying, "Bubba? Bubba? Bubba!" She finds him in his room and plops down beside him, lays her head on Tobin's pillow and gestures for me to pull the blanket over her. The boys are currently sleeping on a pallet on our floor as we've moved Lauren to the crib in the kids' room and let her have that room all to herself obviously at nap time but also at night. Having her own room has helped her get over her latest round of night waking, it seems. I'm sure this sleeping arrangement saga is to be continued, so stay tuned! 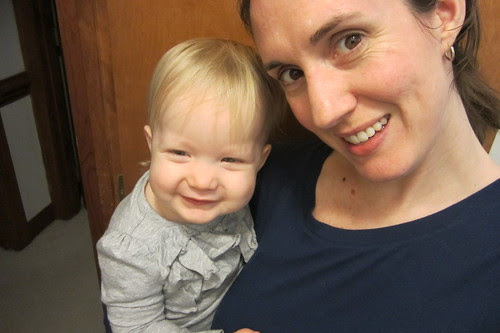 Lauren sleeping in a room separate from me has given me the best sleep I've had in a year and half. To be fair, she's had good stretches of sleeping through the night but it's not been unusual for her to wake and cry even though she puts herself back to sleep. Before the holidays, I think she finally caught on that I was just right there in the big bed next to her Pack'n'Play so she started demanding my attention. And even on nights she didn't, my light-sleeping tendencies had me waking and often fretting with every noise she made. Now I sleep much better with the physical distance between us. Physical distance isn't much of an option during the day though. It's truly an honor to be her favorite person in all the world but some days it feels like if she's not in my lap or on my hip, she's flopping on the floor crying because she isn't. 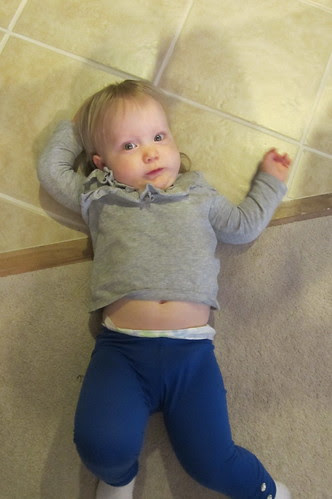 The better nights have helped me be more patient during the days though. And I know this is all part of her growing up and one day soon I'll blink and wonder "Where did my baby go?" 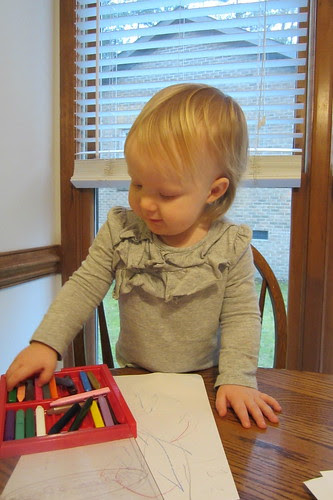 Growing up can be hard on a baby and her mama, but it's also a lot of fun too. The last few days I've had success getting out the crayons and letting her draw with Evan. Honestly, she enjoys coloring more than Evan these days. She recently enjoyed a very fun trip with her daddy to Target. He didn't make her ride in the shopping cart at all and even let her hug a friendly--but unfamiliar--boy! I wasn't surprised to hear about the hugging because she not only waves to random people we encounter on our walks through the neighborhood but blows them kisses! She's also chatting up a storm and recently taken to gesturing with wild arm movements while doing so. She tends to say "Okay? Okay. Okay!" while playing or trying to figure things out. Today, I handed her a cup and she said as plain as day, without any prompting: "Thank you, Mama!" She continues to love impersonating animals and had her brother's cracking up at her piggy "oink! oink!" at dinner tonight. And speaking of dinner, she's eaten her brothers under the table lately. They suddenly aren't keen on family staple "red pasta" (penne with marinara) but she gobbles it up and eats broccoli to boot, adorably asking for "more trees!" She's even impressed me by becoming my first kid to eat scrambled eggs. I guess it doesn't take much for this mama of picky-ish eaters? All this to say, Lauren keeps me busy and still overwhelmingly charmed as she finds her place right beside the rest of us. 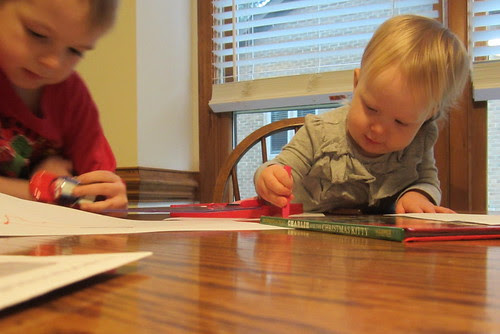