Ten years ago, May 16, 2006 was the last day I coached high school baseball. We're in the midst of baseball season at our house now, with Evan and Tobin enjoying fun, successful seasons for their respective teams. As we enter a 6-week birthday season at our house, I realize how much weight this time of year carries in my mind and heart. A lot of it is tied up in baseball.

Much of my identity growing up was tied to being a baseball player. It was the thing that was my own--my dad was a musician like me. Sarah was my equal in school and at church. We all sang in choir and liked to read books and watch Star Wars movies. But baseball always felt uniquely mine.

An extension of it being mine was the unique path that it gave me to people in my life. One of my favorite parts of coaching was calling my Papa after games and letting him now how my teams were doing. As a kid, I remember him always being up for a game of catch when we visited in the summers--even after he had worked all day in the sun. I loved his stories about playing catcher for his town's team as a younger man. He and I led radically different lives, but we shared baseball.

The first time I remember hearing my dad cuss was at a baseball game. I was in high school. I don't remember the game, the opponent, the score, or anything. But I remember my dad yelled "That's bullshit!" from behind the backstop while I was pitching. I was proud: my ordained-minister dad who didn't really play ball, and who always seemed the definition of poise, was into my game to such an extent that he swore at an umpire. And I knew he wasn't doing it because of his passion for the capital-B-game-of-Baseball--it was for me. It's silly that I would have such a fond memory of something that I'm sure he wouldn't have been proud of, but it meant, and still means, a lot.

When Allison and I met, part of our shared interests was a love for baseball. Some of my earliest memories of her revolve around the baseball playoffs of 1995 -- how could I have known those would be the seeds of the most important relationship of my life? We got to watch the Braves win the World Series together. We watched games together, made sure to catch SportsCenter together, and years later made a traffic-snarled trip to Atlanta to see the Braves eliminate the Mets in the playoffs. I liked to tease her that David Justice, one of her favorite players, was the reason I stopped following the Braves (and really, how do you release Dale Murphy for a rookie anyway?).

I started coaching during a difficult first year of teaching. Hitting fly balls and running drills was a means of making positive connections with students I wasn't encountering in my remedial Freshman English classes. It was a means of meeting new friends and colleagues when I changed schools when we moved to Durham. Two days before Tobin was born, we lost in the state playoffs to a team from Raleigh that had no business beating us. Baseball faded a bit from my mind for a while.

The fall after Tobin was born, I would pick him up after school at his daycare. It was a nice daycare, but I could never get there early enough. I wanted to spend all my time after school with him. So, when it was time to start pre-season workouts for baseball, I knew my heart just wasn't going to be in it. I wanted to be with Tobin as much as possible, and part of me resented the time I wasn't spending learning how to be a dad. I've worked with a lot of coaches who do a good job of balancing the demands of family and their sports, but more than a few warned me against sacrificing family in favor of the team. That advice rang true for me. But as a dad who loves to play all the time, baseball was destined to be part of my role as a dad.

Now my boys are baseball players. Evan plays with an enthusiasm and emotion that drives him to lift teammates in hugs in the dugout and blink away tears when he grounds out. No play is impossible in his mind--he'll come up throwing from left field in hopes of getting a long-distance put-out at first (we'll work on the fundamentals later). Also fitting his personality, Tobin plays with a calculated approach. His enthusiasm usually manifests as a fist-pump or a high five with a teammate. In a game last week, he was playing right field. With a runner on first, the batter shot an apparent single through the infield to him. His coaches yelled "TWO! TWO!" thinking, rightly, that the single was ceded and the runner needed to be held at second. Tobin came up throwing to first, and forced out a surprised runner there. An equally surprised runner stayed at second base, awaiting a throw that had recorded the out behind him. The team's coaches cheered T's on-the-fly decision. I asked Tobin about it after the game, and he said "Well, the runner was going to make it to second, but I saw the batter was going slower to first. So I decided to get him out." Just that matter-of-fact.

Lauren makes friends with kids and skitters around in an irregular orbit at the boys' games. She'll appear briefly at the dugout or on the bleachers to yell encouragements, then disappear to work with other little brothers and sisters on rock collections, clover necklaces, or other diversions. I hope she'll decide to play on a team when she's a little older, but even if she doesn't, she has made the baseball field her own. All five of us find our own roles at the baseball field.

It's only fitting that 10 years out of coaching, and just under 10 years of parenting, and almost 16 years of marriage that baseball feels sometimes like the constant. I'm thankful for baseball, and its place as the intersection of so many of the blessings of my life. 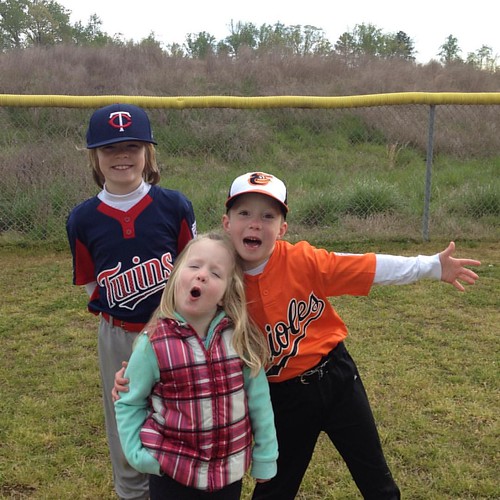