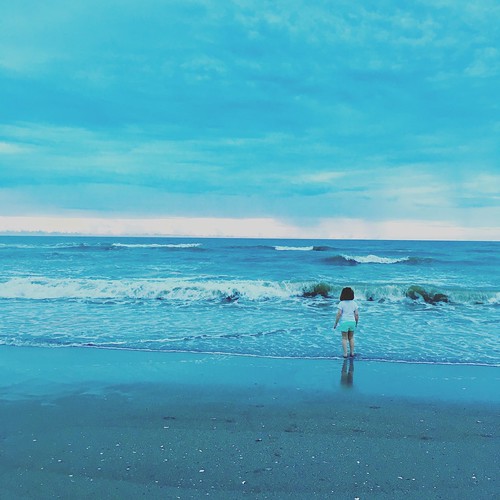 Earlier this week, we arrived at a beach house to share the week with two other families: six adults and seven kids. Our friends Kari and Adam flew in from Colorado. Our friends Danielle and Mattison drove down from Cary. Our kids have enjoyed the ocean, playing board games and hide-and-seek, and lots of snacks. We adults have enjoyed shared meals and drinks and long, late-night talks.

Next week, we'll spend another week at a beach house just nine miles away with five other families (12 adults, 14 kids) hailing from Colorado, Boston, Maine, and even Toronto. I imagine it will have a different feel from this week, with twice as many people, but I think there will be lots of similar feels: enjoying being together and watching our kids play.

I am struck by the abundance of amazing people who have crossed our paths and remained in our lives, even though we almost all live very far away from each other. This week, we're spending time with friends we met when I was in law school. Next week, our group of friends centers around connections to Riverside.

I am thankful for these people, their friendship, and the opportunities to make memories together this week and next.
Posted by allison at 10:57 AM No comments:

I talk myself out of reading sometimes. I enjoy it, but I'll decide that there are more productive things I could do with my time, or I want to exercise instead, or (more often than I should) I convince myself I don't have time to really read, so I'll putz around on the internet for long enough that I might as well have read something substantial anyway.

This summer I decided to read more. I've been inspired in part by Tobin, who chewed through all the Harry Potter books and at least another dozen novels in the first 6 months of the year. I read Ender's Game for the first time after hearing about it (and its author) for decades. I read White Trash. I read the most recent Rick Riordan book to try to keep up with T. I read a couple of other "easy" books.

The book that surprised me most, though, and that has really made me want to prioritize reading more as part of my weekly routine, was Gilead, by Marilynne Robinson. In the summer, I usually like to read nonfiction or pop fiction, since I spend a lot of time at work with capital-L literature. Despite trying somewhat deliberately to avoid deep fiction, I fell for this book hard, and felt something I haven't felt from a book in a long time: a thirst to finish it accompanied by a paradoxical sadness that it was going to end.

The book hit me on a number of personal levels: as a father, a son, a baseball fan, and as a member of a family dedicated to church work. Rather than give a synopsis, I'd prefer to quote a couple of passages, because what I'm feeling most grateful for is art's ability to stir emotions and challenge the way I think.

This passage captures the magic of the way I (we?) experience little epiphanies of our existence, and the simple way in which they intermingle with the other details of our lives, in this case baseball and the meditative wiggle room the pace and phrasing of the game allows.


It was one day as I listened to baseball that it occurred to me how the moon actually moves, in a spiral, because while it orbits the earth it also follows the orbit of the earth around the sun. This is obvious, but the realization pleased me. There was a full moon outside my window, icy white in a blue sky, and the Cubs were playing Cincinnati. (45)

This next passage gets the gist of a lot of the frustration I have with arguments among people who would claim to provide "scientific" proof of faith and theology. I've never been able to articulate why those kinds of apologetics always ring of "methinks thou doth protest too much."


In the matter of belief, I have always found that defenses have the same irrelevance about them as the criticisms they are meant to answer. I think the attempt to defend belief can unsettle it, because there is always an inadequacy in argument about ultimate things. We participate in Being without remainder. No breath, no thought, no wart or whisker, is not as sunk in Being as it could be. And yet no one can say what Being is. If you describe what a thought and a whisker have in common, and a typhoon and a rise in the stock market, excluding “existence,” which merely restates the fact that they have a place on our list of known and nameable things (and which would yield as insight: being equals existence!), you would have accomplished a wonderful thing, still too partial in an infinite degree to have any meaning, however.

I’ve lost my point. It was to the effect that you can assert the existence of something — Being — having not the slightest notion of what it is. Then God is at a greater remove altogether — if God is the Author of Existence, what can it mean to say God exists? There’s a problem in vocabulary. He would have to have had a character before existence which the poverty of our understanding can only call existence. That is clearly a source of confusion. Another term would be needed to describe a state or quality of which we can have no experience whatever, to which existence as we know it can bear only the slightest likeness or affinity. So creating proofs from experience of any sort is like building a ladder to the moon. It seems that it should be possible, until you stop to consider the nature of the problem.

So my advice is this — don’t look for proofs. Don’t bother with them at all. They are never sufficient to the question, and they’re always a little impertinent, I think, because they claim for God a place within our conceptual grasp. And they will likely sound wrong to you even if you convince someone else with them. That is very unsettling over the long term. “Let your works so shine before men,” etc. It was Coleridge who said Christianity is a life, not a doctrine, words to that effect. I’m not saying never doubt or question. The Lord gave you a mind so that you would make honest use of it. I’m saying you must be sure that the doubts and questions are your own, not, so to speak, the mustache and walking stick that happen to be the fashion of any particular moment. (178)

Throughout the book, Robinson's narrator rang true, and helped me reflect on myriad relationships, discussions, and conversations I've had over the course of my life. What I am most thankful for is the way that this book embraces the paradox of the beauty and sadness of life as we know it, while advocating humbly that this life and what comes next are worthy of honor and effort and love. That's a paradox that I've tried my best to navigate over the last decade, but the one I still struggle most with. The solutions others offer are often too extreme in their approaches: nihilism on one side, faith-inspired platitudes on the other. Robinson (through her narrator) deals clearly with the absurdity, joy, and sadness of life while somehow maintaining a sense of humor. And if I ever were to solve that paradox, I "would have accomplished a wonderful thing, still too partial in an infinite degree to have any meaning, however."
Posted by matt at 10:22 PM No comments: