This morning, Lauren had a fantastic soccer game. She scored a goal, dribbled all over the field, and played defense that prevented about 3 goals. Along the way, she also did a couple of classic Lauren things.

1: She hugged her friend (and opponent) Elliot twice during the game (while the ball was in play). And 2: After she fell on a teammate, she stayed behind and corralled the other kids on the team to make sure he was ok. The other team scored an uncontested goal, but she said about it later "A goal isn't as important as making sure your teammate is ok."

Then she capped of her day by putting up this drawing on her door. 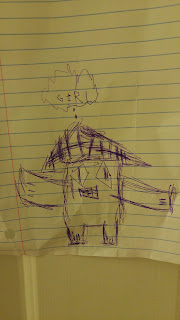 I'm thankful for my Lala, and the independent, awesome girl she is and continues to become.
Posted by matt at 8:56 PM