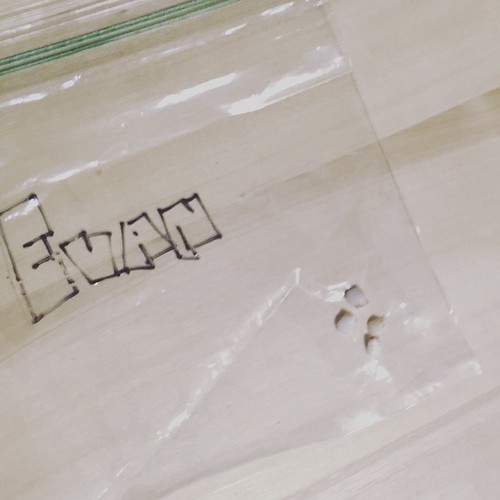 This morning when Evan woke up we asked what the Tooth Fairy had given him, because he had put FOUR teeth under his pillow. His reason for keeping the teeth, some dating back to early May, was varied. At first, he was sentimental: "But I love that tooth. It's the only one of those teeth I've ever had." Later, as they accumulated, he mused, "Maybe I'll just save all the teeth I lose from now on, and then I'll get a lot of money at once. It'll be like my birthday!" But last night, when his fourth top tooth was added to this bag, he declared he was ready. He worried that the Tooth Fairy wouldn't accept them all at once: "Maybe if she doesn't take them, we will separate them tomorrow night."

Well this morning, he said he hadn't checked under his pillow because he wanted the whole family to watch him do it. When he discovered the five-dollar bill, he was surprised because the usual reward is a dollar per tooth. We suggested that maybe the Tooth Fairy was so impressed with four teeth at once that she gave him a bonus. He wondered, "Maybe she miscounted in the dark . . . because there were so many teeth?"

I'm grateful for my sweet, hilarious middle child and everyday moments like these that make for fun family memories.
Posted by allison at 2:01 PM