I have a vivid memory of my mom and dad getting excited (is that really a fair description?) about their DayPlanner calendars when I was a kid. They had dividers and inserts in their two (maybe three) ring little calendars. The notebooks were little leather books that could have been journals or devotionals. When the new year would roll around, they'd switch out the calendar pages and refill the notebooks. I wasn't curious about the contents of the calendars, but the discarding and renewing of days, weeks, and months was a process that stuck with me. Each year was different, but was populated with the same kinds of activities, meetings, and observances. 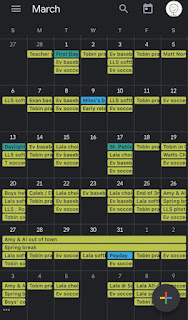 Our calendar this spring was packed from mid-February through the end of May. I keep a digital calendar, but the principle is the same as my parents' calendars.  About six weeks ago, a friend and I were trying to figure out when we could get together for dinner at my house. I looked at our calendar and realized the first week of June would probably be the first time I could count on free time. My DayPlanner was full. The kids played on 4 teams among them this spring. The boys completed confirmation classes at church and dedicated extra time almost every Sunday to class and study. It's apparent I didn't make time to post here during May. We were busy, but we made it happen.

Tobin's U19 soccer team had a good season. He found a permanent position in a new offensive set that helped him thrive. One of the things that amazes me about team sports is how one small change seems to set everything in its right place. T's team spread their offensive attack wider and worked the ball laterally more for the last 6 games or so. That small switch payed dividends: they beat teams that had bested them earlier in the year. Their fluidity on offense improved, and along with those developments, the team as a whole seemed to come together stronger than it ever had. They finished their year going undefeated in a season-end tournament on a couple of blazing-hot days in Raleigh. During the last stretch of the season, T joked that he felt like he never got subbed out at all.

Evan played two sports for two different teams. He played baseball for his middle school. He played first base most of the time, but also was a consistent relief pitcher. At one point he was leading the team in RBIs--I'm not sure what the final tally was. The competition of middle school baseball was feast or famine. He observed one evening that it seemed like his team either won by the mercy rule or lost by the mercy rule. He is excited by next season's prospects because almost every member of the starting team will be back for next year. Ev also played another season for his year-round soccer team. He excelled as goalie, and has fielded a lot of requests to move up a level of play. He had hoped to play more in the field this season so his skills there could develop, but he wound up in net most of the time. His attitude was great about it; he would admit to wishing he could play more midfield, but he also really enjoys the competition and focus of being goalie.

Lauren played "majors" softball this year, which came a year earlier than I had expected. When her tryouts put her in the majors draft (which is the highest level of Little League softball), I was a little worried whether she was big enough/fast enough/experienced enough to keep up. As I should have learned with Lauren by now, I was wrong to underestimate her. She hit 2nd in the lineup most of the season and played reliable defense in the field, mostly at 2nd base and left field. She was a little nervous and shy at the beginning of the season, but by the end was all-in. Their team started slow, but had a brilliant 6-game unbeaten streak in the middle of the season. They beat every other team in the league at least once, and even navigated some poor sportsmanship by opposing teams with grace. Her coach was consistently positive and encouraging throughout the year, and even gave Lauren an award for the way she grew into the team and her game during the year. Beyond the success of softball, Lauren also jumped in to school chorus and all-county chorus with both feet. She enjoyed music so much that she has signed up for band next semester in 6th grade.

Each one of the kids put themselves out into the world this year with a confidence and ethic that reminds me consistently of what remarkable young people they are. We still talk at home about giving ourselves room to feel and be and do what we need in the wake of Allison's passing. I half-expected that at least one of them would need to take some time off from a season or an activity. Instead, they each balanced school and sports and church and other commitments with grace and dedication that was exactly the inspiration I needed on the days when the calendar felt more daunting than I might be able to manage.

Allison would have loved all of it. Yesterday was 7 months since she passed away. Amid the regular roller coaster of emotions that accompanies our sports seasons every year, this one had a different weight every time out. Personally, I alternated between wanting to generate a kind of  "do it for mom" energy and feeling profoundly sad that she wasn't in the folding chair next to me for every game and practice. Al and Amy were invaluable all season, helping ferry kids all over, and watching as many games as possible. Our friends on other teams and even from other states checked in regularly about the hustle and grind of spring sports. I'm thankful for the help and the company, but it would be dishonest to say it wasn't difficult regardless.

Now we're on to summer, another "first" to navigate. We have plans for travel and some projects on and around the house. Last night, we ate the first of what I hope will be many meals from the garden. I made a pesto that I used to make for Allison. We have peppers and tomatoes and cucumbers flowering in the garden. I've gotten to throw darts and hang out with neighbors for what feels like the first time in ages. This reprieve after a busy stretch provides a welcome contrast to the hectic pace we kept for a long stretch. Allison concluded a post a lot like this one in a way that reminds me she is with us in more ways than I sometimes let myself think; it also highlights the contrast of this busy season with so many of the ones before:

the current fullness of our lives highlights so many things I am grateful for: healthy, able bodies; sports; community; a true partner in parenting; two vehicles; a big yard for football; jobs; good schools; and even enough hours (in some days) to make good food for my family.

Thank you so much for this update. I've thought of y'all and how the hecticness of sports and life were landing this year. I loved reading about each of your kids successes.