The NCAA Tournament is an exciting time in our house. I've followed for as long as I can remember, and Allison has been a fervent fan at least since we started dating. Tobin is all in, too. At least half a dozen times this weekend, T said "Dad, I reeeally want to do my braaacket." Even though I explained every time that the brackets wouldn't come out until Sunday evening, he kept asking. Evan isn't interested so much in watching basketball as he is playing it (more on Evan's bracket at the end).

Tobin cheered his way through the seeding Sunday, and we set a date to fill his bracket Monday after I got home from work. On Monday, I asked "Do you want to do it on paper or on the computer?" Pragmatically, he decided "Computer. My handwriting isn't so great, and those lines are really little."

After getting logged in, the bracket was before us. In the past, Allison and I have put controls on T's picking, like refusing to allow him to advance a 16 seed over a 1 or a 15 over a 2. No such things necessary this year. He understands seeding and the at-large process better than many adults I know.

From the West region: "New Mexico versus Long Beach St.? I've never heard of either of them, but New Mexico has a 5 and Long Beach a 12, so I guess that means the people who make the tournament think New Mexico is good. So New Mexico."

Also in the West: Tobin has been a little obsessed with Murray State since they were the last team to lose a game all season. When he realized it, he exclaimed "Murray State still only has 1 loss! Every other team in the tournament has at least 2!" This logic led him to name Murray St. the upset winner of the West region over Michigan St.

After my assurances that John Henson would in fact play for the Tar Heels, he chose UNC to win the Midwest region. The only upset he chose in the region was the 9-8 game between Alabama and Creighton. Why Alabama? "They're Uncle Donnie's favorite team."

In the East region, his bracket followed the seeding exactly. I told him Tuesday evening that one of Syracuse's best players was ineligible, and that he might want to re-think his picks. He considered it briefly, then said "No, I'll keep it the same. They're a really good team. Even though Cincinnati beat them, I think they're good."

Last, the South region is where Kentucky holds the #1 seed. If you'll remember, Tobin remarked last December, when Kentucky beat North Carolina by 1 "I hope they play again. Next time for a championship." In dual decisions that make me proud, Tobin chose Kentucky to win the region and Duke to lose before reaching the Sweet 16: "Notre Dame will beat Duke. Notre Dame beat Syracuse this year, and Syracuse is way better than Duke."

With his Final Four of Kentucky, Murray St., Syracuse, and North Carolina set, he quickly advanced North Carolina and Kentucky to the final game. I expected him to follow suit and choose his Tar Heels just as quickly to win the national title. Instead, he stopped and thought for a while, chewed on his lip and thumb, then looked away from the screen for a while. He gave me a sly grin, then clicked on Kentucky to win the title. When I asked if he was sure, he said "They're both great teams, but Kentucky is just really good. I hope UNC wins, but I think Kentucky will beat them."

Given Tobin's excitement, Allison and I both tried to get Evan to pick games and join the fun. Allison pulled the computer out and tried to get him to look at pictures and pick teams. It went something like this: "Which one do you want? Michigan or Ohio? Wolverines or Bobcats?" Evan would say "No, no want Wo-vine or Cats." Or like this: "Do you want Eagles or Bulldogs?" "No. Want Eagles and Bulldogs." I wound up filling up parts of his bracket for him, asking him throughout the evening which he would pick based on mascots. Since he loves animals, his is probably the only bracket in the country that features a California (Golden Bears) vs. Florida (Gators) championship game. He was much happier hooping on the deck instead. 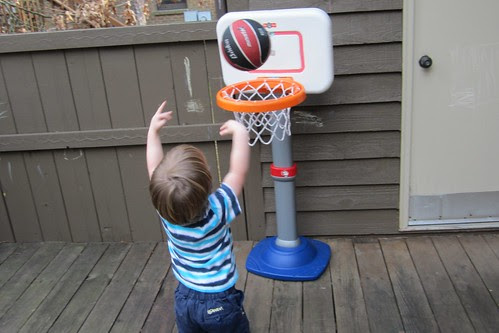