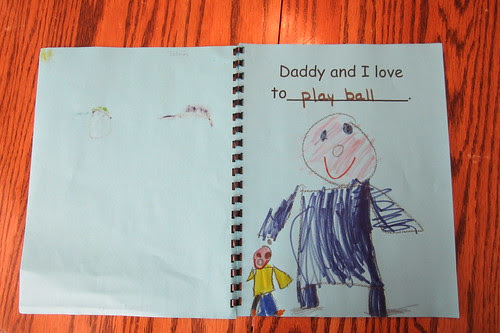 Although our focus is mainly on college basketball this month, Tobin has taken an increasing interest in the NBA. Neither Matt nor I have paid much attention to professional basketball in many years--except for maybe watching the NBA Finals--so we find this new-found interest amusing. But it's totally understandable as we've recently acquired the revamped NBA Jam for our Wii. Tobin and Matt have put in a some quality father-son time playing. I don't play but as I understand it, you can play two-on-two matchups and also "unlock" classic players. This leads to entertaining exchanges like Matt advising Tobin that he probably shouldn't use the Cavaliers' Mark Price and Brad Daugherty against the Spurs' David Robinson and Tim Duncan. I think Tobin ignored this advice and played with the Cavaliers duo. He also has a thing for the Browns in his imaginary NFL games. The kid loves Cleveland! 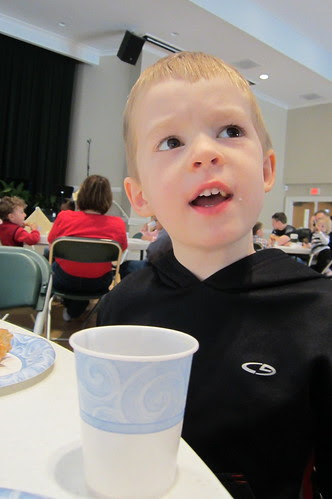 Another classic player Tobin has encountered is Dennis Rodman, who plays for the Chicago Bulls in the game. He notices Rodman has green and orange hair. But our son is more concerned that Rodman's jersey number 91 defies the convention of each digit being five or less (so a referee assigning a foul can identify a player's two-digit number by holding up the appropriate number of fingers on each hand). Over supper one night, Tobin asked Matt why Rodman picked 91. Matt explained Rodman seemed to like being different from other players. Matt pointed out that Rodman also had different colored hair, an especially extensive coverage of tattoos and wore earrings and nose rings. (He did not mention his cross-dressing!) Matt said sometimes people like Rodman just feel or act different from others, but what was important about him was that he was a really hard-working, talented basketball player. In fact, Matt noted, he was one of the best defensive players and rebounders to ever play the game. I'm not sure this completely sated Tobin's curiosity, but it went a long way in stemming the tide of questions.
Another thing Matt mentioned was that Dennis Rodman was one of my Memaw's favorite players. And that's totally true. My mom's mom, a kind, gentle, Southern Baptist lady from Lake Charles, Louisiana, loved the Chicago Bulls. I remember visiting her in the summers and watching those classic early-1990s Eastern Conference Chicago Bulls-Detroit Pistons games with her. She adorably and nervously cheered on Michael Jordan and company. She didn't care much for Rodman, who played for Detroit then. But when Rodman joined the Bulls for their 1996-1998 three-peat as NBA Champions, Memaw held him in as high esteem as Michael Jordan. When her children or grandchildren made snide remarks about Dennis Rodman's appearance or his antics, she would come back with a quick defense like "All I know is, he's a great rebounder. I don't want to hear anything ugly about him." Memaw was fairly soft spoken; when she spoke strongly on a subject, people listened.
So oddly enough, a basketball video game has me thinking about Memaw, who passed away last October. Of course, I also find myself thinking of her often because of my current line of work: raising three kids. Her brood was twice the size of mine! I try to imagine what it was like tending to the needs of six children, raising them in a time very different from now. I know it was hard and that she faced special challenges, but I find such inspiration in her legacy. Her six kids remain remarkably close. Since 1990, all six siblings, and many of their kids and grandkids, gather each summer for a week-long vacation at a Louisiana state park. Incredibly, all six of her children were together at her bedside during the last days of her life. All sixteen of her grandkids traveled to Lake Charles to be at her funeral, hailing from as far away as Durham, North Carolina and Chicago. After the service, Matt paid her a great compliment when he said the stories people shared made him wish he'd known her better. To know Memaw, was truly to love her. She embodied a sweet strength that I admired as her granddaughter and can only hope to approximate as a mama.
Amusing association aside, I think Memaw's affection for Dennis Rodman exemplified her magnanimous view of people. I hope Matt and I can honor her memory by teaching Tobin to search for the good in each person he encounters. And I like to think that some of the excitement Tobin feels when he pulls for his favorite team comes quite honestly--from Memaw.
Posted by allison at 8:47 PM

I know you must miss Memaw. Great tribute to her and her love of basketball.
Aunt B

Thank you, Beckie. I do miss her. It's special how the memories of those lost weave their way into our everyday lives.